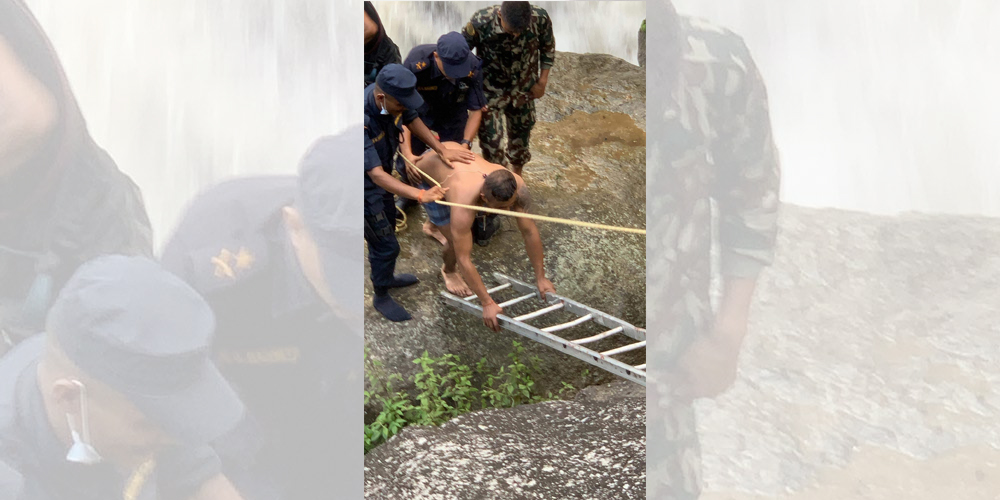 According to District Police Range, Kathmandu (DPRK), a man washed away while he was swimming and a woman jumped into the river.

At around 2:30 pm, Sundarijal Police Rector received information regarding a youth who had gone missing in the Bagmati River at Ward No. 1 of Gokarneshwor Municipality while he was swimming there.

A team was deployed under a Sub-Inspector of Police at the earliest for the rescue. Another team led by Deputy Superintendent of Police (DSP) from Police Circle, Bouddha, and a team from Disaster Rescue Division in Samakhusi, had also reached the site for assistance.

According to police, the missing youth was rescued alive three hours later at 5:10 pm. He was identified as 27-year-old Sandesh Karki.

“Karki and four of his friends had come to Sundarijal from Samakhusi. Karki wanted to swim while his friends denied it. He dived into the river alone but was washed away,” read a statement by the DPRK.

Karki’s health condition was normal and the police let him go home with his friends.

Similarly, a woman, who had jumped into the Bagmati River from the bridge in Thapathali connecting Kathmandu and Lalitpur, was also rescued alive.

Police said that they received information at 4:10 pm that a woman jumped into the river from the bridge. A team was deployed under a Police Inspector from Singhadurbar Police Circle and the woman was rescued with the help of locals within 10 minutes.

The rescued woman was rushed to National Trauma Centre for treatment. Her health condition is now said to be stable. Police said that she identified herself as 20-year-old Anjali Yadav. She has been living in Kupondole, Lalitpur.

Further investigation is said to be underway, informed DPRK.

As the river’s flow increases during the monsoon, police have requested the public to stay away from the river and especially not to swim.

NHRC urges parties to include rights issues in manifestos